THE STORY OF MOHAMMED 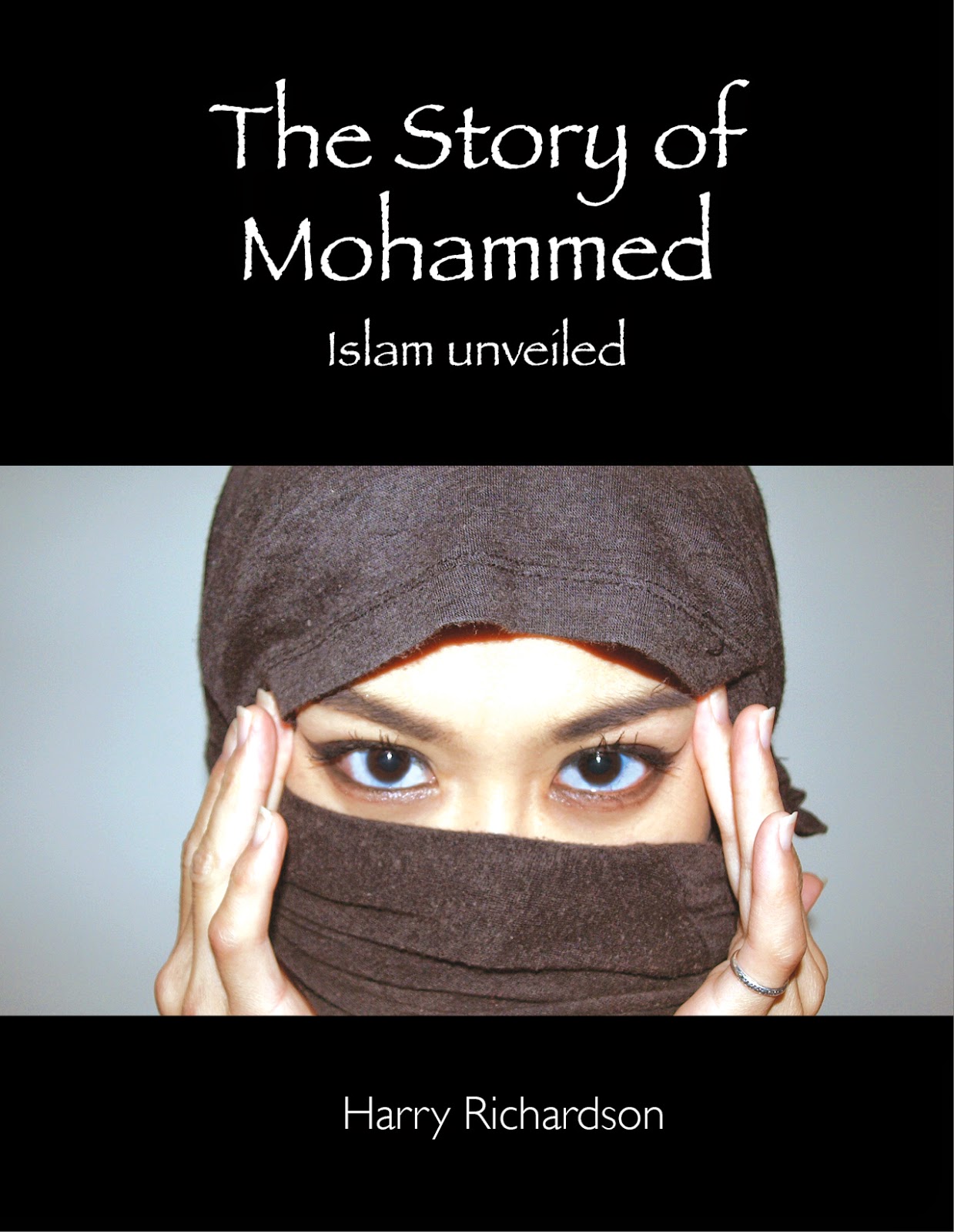 This book is dedicated to all the people of the world, whatever their beliefs may be

Posted by Harry Richardson at 04:17 No comments:


Why would a Non-Muslim want to read the story of Mohammed?

Mohammed’s life story is the key which unlocks the complexities and confusion of the Islamic religion itself. Understanding his story provides a clear insight into Islam and the incredible importance this subject holds for our future.
This is also the most amazing story never told. It is said that truth is stranger than fiction and you just could not have made this up. There are battles, murders, intrigues, rapes, assassinations, torture, intimidation, and much much more. Along the way Mohammed invented Jihad, the most effective system of conquest ever devised.
This amazing book reads like an adventure story and brings the Islamic perspective to life in a way that is both fascinating and informative.
Millions of people, both Muslims and non Muslims are tragically affected by aspects of Islam. More than 95% of all wars and armed conflict today involve Muslims. Muslims also suffer some of the highest rates of poverty, disease, hunger, illiteracy, environmental degradation and many more crippling disadvantages. By tackling the subject head on, this book gives the reader the ability to consider and discuss this subject from a position of knowledge, understanding and truth.


The following reviews come from people who have purchased the book from Amazon.com (or Amazon UK). As of 22/08/14 there were a total of 94 reviews of this book on the various Amazon sites (USA, UK, Australia and Canada). 90 of these reviewers gave this book a 5 star rating.


Review of The Story of Mohammed Islam Unveiled By G. J. Millo
I'll admit I was sceptical when I first came across this book on Amazon - it looks pretty amateurish and the "related books" section doesn't exactly put it in good company. But it's short and it's cheap, so I decided to give it go.

I read a huge amount; at least a book a week on average, going back as long as I can remember, so over the years that's added up to a very large number of titles. So the following is no small statement, and I say it without exaggeration or hyperbole:

This is the most important book I've ever read.

Not necessarily the *best*, but certainly the most important, and if I could,  I'd buy a copy for everyone on Earth. I've read it twice already, and I just ordered three paperback copies to lend out and pass around. When they're gone I'll probably buy more.

So what's the big deal? Well, I can't put it any better than the book's own introduction:

"After studying Islamic doctrine and history, I soon realised that almost all of what is conveyed to us regarding Islam, its goals and its influence on the actions and beliefs of Muslims, is entirely wrong. This lack of understanding has been the root cause of the horrendous policy failures in such areas as the “War on terror,” Middle Eastern foreign policy, the Arab- Israeli conflict and so forth, which tend to dominate our daily news cycle.

It is also clear that the reason for these failures, is an almost total lack of knowledge of the doctrine of Islam amongst all sections of Western society; from politicians, academics, journalists, teachers, right on down to the man in the street. Given the rapidly rising threats from Islamic “extremists” and the growing number of conflicts involving Muslims, this would seem to be a failure of epic proportions."

148 pages later, I can confirm that he's not exaggerating - and I'm wondering why the hell I didn't know any of this before. I thought I was reasonably well-educated about Islam, but now I realise I didn't have a clue, and neither do most of the commentators and demagogues in the West who are shaping public opinion on the subject.

I think this book might save the world.
Like it or not, Islam is on a meteoric rise today and it's going to have a gigantic influence on world politics over the coming decades - much more than Christianity, I'd argue, and you'll find out why in the book.

Islamism (Islam as a political movement) is going to define the 21st century in the same way that capitalism, decolonisation and the rise and fall of communism and fascism defined the 20th. You need to understand it before it's too late.

Oh, and in case you're wondering, I haven't converted to Islam.


Review of The Story of Mohammed, Islam Unveiled by Sinohey (one of Amazon's top 600 reviewers)

This relatively short book is a primer on the story of the presumptive founder of Islam. It is based on (translated) primary sources of Islamic literature, including the Qur'an, the main two books of Hadith (Al Bukhari and Sahih Muslim) and the Sira by Ibn Hisham (based on Ibn Ishaq's work that is no longer in existence). The author has rendered a genuine service to his readers by presenting this well researched and documented biographical history of Mohammed that is largely unknown by non-Muslims and unrevealed to many Muslims - the majority of whom are non-Arab and do not understand the original language of the Islamic doctrine. They study the Holy Scriptures by rote and according to the bias of their Imam.

Mr. Richardson presents the data in an objective, straight forward and matter-of-fact manner. The writing is clear and blunt but devoid of inflammatory conjecture or derogatory characterization. He simply let the facts speak for themselves and the facts do not paint a positive picture of their subject, especially through the prism of 21st century civilization.

The turmoil within the Muslim Ummah today is rooted within its genesis - rejection of the principle of "cause and effect" and total reliance on predestination leave no room for personal innovation, spiritual progress or technical achievement "because all is preordained by the will of Allah". The doctrine of Abrogation "Naskh" has created a schizophrenia of accepted behavior in the believers - the peaceful Mecca sermons are abrogated by the later aggressive militaristic Medina verses that exhort the believers on hegemony and world domination.

The present wave of terrorism around the world and chaos in the Arab countries is simply the application of fundamental religious teaching of Islam, free from the veneer of deceptive "Taqiyyah" or modern civilization. Sunni Wahabi Salafism is Islam at its purest, as was practiced by the contemporaries (Al Sahaba) and immediate successors (Al Salaf) of the Prophet.

This book will provide an honest and unvarnished insight into the mindset of "Dar al Islam" and their unrelenting pursuit of domination of "Dar al Harb" from the 7th century to the present. Periods of peace (Hudnah) are considered temporary, but never permanent, until world hegemony is achieved - by subterfuge, by fecundity or militarily.

This book should be read with an open mind and equanimity. It is NOT a hit piece against Muslims or their religion. It is factual rendition of the history of Islam and its founder; allowing the readers to form their own conclusions. I highly recommend it.

Full disclosure: I am fluent in Arabic, studied and taught Islamic culture for over three decades; lived, taught and worked in several Muslim/Arab countries.

CLICK HERE TO CONTINUE READING THE BOOK
CLICK HERE TO READ MORE REVIEWS ON AMAZON
Posted by Harry Richardson at 04:16 No comments: