Abrogation: The cancelling out of earlier Koranic verses by later ones.
Abu Sufyan: Leader of the Quraysh, Mohammed’s main rival in Mecca.
Abu Talib: Mohammed’s Uncle who raised him as a child.
Aisha: Mohammed’s youngest and favorite wife.
Al-Tabari: One of Mohammed’s biographers, a former student of Ibn Ishaq on whose work his writing is based.
Badr: Location of the Muslims first major battle with the Quraysh.
Banu Qaynuqa: The first of three tribes of Jews living in Medina
Blood money: Money paid by tribes as compensation when they have killed a member of another tribe.
Bukhari: Compiler of one of the two most revered collections of Hadith
Byzantines: The remnants of the Roman Empire in the East. At that time it was still one of the most powerful and technologically advanced on the planet.
Coitus Interruptus: Actually a Latin term, referring to a form of contraception which relies on withdrawing the penis from the vagina before ejaculation.
Dar al Harb: Literally the land of war. Refers to any land which is not under Sharia Law.
Dar al Islam: Any land which is ruled by Islam and is under Sharia Law.
Dhimmis: Non-Muslims who submit to Islam and agree to be ruled by Sharia Law.
Dualism: Most religions have a single set of ethics which apply to all people. Islam has two sets of ethics, one for Muslims and one for Non-Muslims. This is referred as dualism.
Ghatafans: A tribe of Arabs who opposed Mohammed.
Hadith: A collection of stories about Mohammed and his traditions. Of the many collections of such stories, two are considered without equal (Bukhari and Muslim) four more are considered to be reliable and the rest are considered to be very weak.
Halal: Literally “permitted”. Most Westerners associate this with food however it really means anything which is permitted by Islam.
Haram: Opposite of Halal. Literally “forbidden”.
Helpers: The Medinan Muslims who welcomed Mohammed to live with them after his flight from Mecca.
Hudna: A temporary state of peace with a group of non Muslims.
Hypocrite: Someone who pretends to be a Muslim but is not a true believer.
Immigrants: The Meccan Muslims who fled to Medina with Mohammed.
Ibn Ishaq: Mohammed’s first and most celebrated biographer. No original manuscript of his book, Sirat Rasul Allah (the story of the prophet of Allah or “The Sira”) exists. What we have was put together by two of his students, Ibn Hashim and Al Tabari from their notes after his death.
Jihad: Literally “to struggle” although in rare instances this referred to a spiritual struggle to improve oneself, in Islamic Doctrine, it usually meant “fighting in Allah’s Cause”.
Jizya: Tax levied upon Dhimmis who have submitted to Islamic domination.
Kabah: A pagan Arab shrine which was taken by Mohammed to be Islam’s holiest site after the conquest of Mecca
Kaffir: A Non-Muslim, literally “a concealer” who denies Allah’s message despite knowing the truth.
Khadija: Mohammed’s first wife and the first Muslim convert.
Khaybar: A wealthy Jewish town plundered by Mohammed, largely for treasure.
Mecca: Mohammed’s birthplace in Arabia and still home to the Kabah.
Medina: Town to the North of Mecca where Mohammed made his home after fleeing from Mecca.
Muslim: Literally “one who submits” (i.e. to Islam).
People of the Book: Refers to Christians and Jews who, unlike the Pagan Arabs, had a written holy book.
Predestination: The belief that everything is preordained and people therefore have no choice in their lives, these choices already having been chosen by God (Allah)
Quraysh: Mohammed’s clan in Mecca. They became his enemies after rejecting his teaching.
Ramadan: Islam’s holy month. During this time, Muslims must not eat or drink from sunrise to sunset.
Shahid: A martyr who dies whilst fighting in “Allah’s Cause” (Jihad)
Sharia: Islamic Law. Based on the teachings and example of Mohammed as articulated in the Koran and in his biographies (Sira and Hadith). The most celebrated manual is “The Reliance of the Traveler”
Sira: Sirat Rasul Allah or “The Story of the Prophet of Allah” by Ibn Ishaq is Mohammed’s oldest and most revered biography. The original manuscript was lost but was reconstructed by two of his students from their notes.
Sunnah: this refers to the example of Mohammed as found in the Sira and Hadith. Whatever Mohammed did or said is “Sunnah” and the perfect example for Muslims to follow.
Taquiya: Also referred to as “sacred deceit”. Essentially it means deceiving people to advance Islam.
The Golden Rule: Do unto others as you would have them do unto you.
Torah: The Jewish Bible, essentially what Christians call the Old Testament
Uhud: Islam’s second battle with the Quraysh which the Muslims lost.
Ummah: Muslims consider themselves to belong to a nation which they refer to as “The Ummah”.

Australia Wake Up is a group dedicated to engaging Australia's politicians in issues related to Islam and countering the influence of groups such as the Muslim Brotherhood. Their website is HERE

Oz United's mission is saving all that was good about Australia, but is being lost through a general lack of understanding of many important issues. A part of this focus is on Islam and educating Australians about this important issue.

Freedom and Heritage is another group which focuses mainly on Islamic issues, see flyer below. 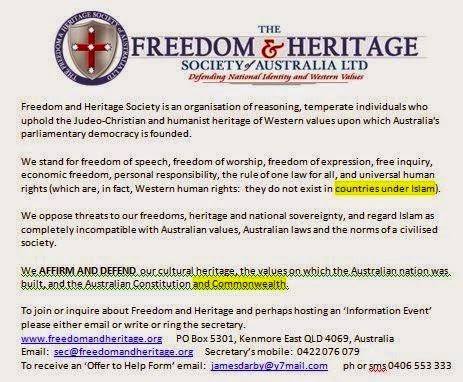 Appendix
Posted by Harry Richardson at 03:12