Muslims are human beings like any other. Any of us can become a Muslim. We simply have to make the expression of faith (the Shahada) three times in Arabic. Islam however is not a human being and neither is it simply a religion.

Rather, it is a system. A system which was designed by Mohammed (and to a lesser extent his early followers) to take over the world by force if necessary.

Once accomplished, all other cultures would be destroyed and replaced by an Islamic monoculture. If this assessment is only partly correct, then at the very least we should be having an informed and very serious discussion about the implications of growing Islamic power.

This idea might sound far-fetched to someone who is ignorant of Islamic Doctrine. We already know however, that firstly it is entirely consistent with Islam’s goals, which are clearly set out in Islamic Doctrine.

Secondly, even a casual look at Islamic influence today, shows all the results we would expect, were such a plan to be in force. Bear in mind that what is covered so far in this book, is just the tip of the iceberg.

For example, how many people have heard of a ZUS? Probably not many I would guess. ZUS (Zones Urbaines Sensibles, or Sensitive Urban Zones) is the rather nondescript acronym given by the French Government, to an area in France which is mostly inhabited by poor (mostly Muslim) immigrants[1].

ZUS’s are conveniently listed on a webpage by the French Government, complete with street maps[2]. From what we know of Muslim demographics and immigration, (and government projections confirm this) we can be sure that these zones will be growing exponentially over the next few decades.

Just think about that for a moment, 8% of the French population are living in areas which are, to some degree, under the occupation of a foreign power, and it hasn’t even rated a mention in the press. Clearly something very strange is going on, which isn’t explained by the official “Muslims are poor victims of Western aggression” story.

Nobody knows how the future will pan out, but it looks like we are at a tipping point between two scenarios, one optimistic, one pessimistic.
In option one; Muslims will continue to increase in numbers and power throughout the Western world. Immigration and high birth rates will mean increasing political power assisted by money from the global Ummah.

There will be a steady decrease in freedoms, particularly freedom of speech and religion. People who oppose this process openly will be vilified, prosecuted, threatened, and even murdered. Sharia Law will steadily replace Western secular law and non-Muslims will find themselves victim to ever increasing discrimination and disenfranchisement which they will be powerless to oppose.

Sporadic instances of resistance to this process would be met with rioting and random retributions followed by harsh government clampdowns on those responsible for the violence (the non-Muslims).

The end game is of course an Islamic society ruled by Sharia Law with the non-Muslims living as dhimmis, paying poll tax to the Muslims and being humiliated.

Scarily, although it isn’t politically correct to say so, much of this is playing out right now and the rest has occurred many times throughout history and so is hardly without precedent. How long this process might take is hard to know but my best guess would be that within 30 years our societies will be unrecognizable. Many of us will therefore be around to explain to our grandchildren how we let this happen.

In the optimistic scenario, things will pan out very differently. People will begin to understand what Islam is really about. They will educate themselves and others and an informed debate will begin. Muslims will be expected to answer hard questions about their beliefs and no free pass will be given in the name of political correctness.

Those Muslims who advocate or engage in violent resistance to this process will be imprisoned and/or deported. Principles such as the rule of law, equality and freedom of speech will be reasserted and all citizens will be expected to uphold them. Muslims who wish to retain their faith will be expected to understand the implications and provide cast iron assurances that it would not lead to unacceptable behaviour.

My guess is that the vast majority would reject much, if not all of the teachings of Islam and that ex-Muslims would be most vocal in calling for a total ban.
Only one of these options is possible. Which one prevails depends to a large extent on you. As one of the few people to understand this subject you now have a choice. Either you can ignore this information and wait for someone else to do something about it, (which they won’t) or you can take a few simple steps to ensure that option two is the one we all get to live with.

That means finishing this book, doing a little research yourself (if you are so inclined) and then sharing this book and the knowledge you have with as many people as possible. The best way to do this is covered in the next chapter but be aware. The world is now depending on you and those around you to educate and motivate others. Our forefathers shed blood to give us freedom; with just a little effort we can ensure that our children do not lose theirs.

One way you can really help make a huge difference, is to find out your MP’s email address and send this to him/her, or even better, print it out and take it to them (paperback copies are available at Amazon.com (search for "The Story of Mohammed Islam Unveiled") or contact me for a printable pdf file at harryr@actforaustralia.com).

In fact anyone you think might benefit from this knowledge, be it newspaper editors, judges, school principals, university lecturers etc. the more the merrier. (Important tip: people like to read it in print, not on the computer).

Another way you can really help make a huge difference, is simply to leave a good review of this book on Amazon's Kindle site. This is very important. As you probably know many people look at the reviews before they decide to purchase a book. Please take time to do this.


A note of caution before you write a review. Please avoid being critical of Islam or Muslims. Once you have read the next chapter you will understand why. Comments along the lines of “It really opened my eyes” or “This book is fantastic” would be very helpful.

I would also ask you to think hard about how many stars you leave on any review. A five star average on Amazon is like the Holy Grail to book credibility. Very few books achieve this and those that do stand out from the thousands of other books like nothing else.

It only takes one review at four stars to take this down to 4.9. The difference this makes will influence the decision of thousands to download or not so please, think long and hard before giving less than five stars.

One of the best ways to spread this around is to “Gift” Kindle copies to people through Amazon as follows: (unfortunately this only works for people in the USA.


3.      Enter the personal e-mail address of your gift recipient.


I have published this book on Kindle with a price of US$0.99 cents which means that most people could easily gift ten copies to people who they think would read them. As you may know, if your friends do not have a Kindle device they can easily download the free app or program for their ipad or computer (easy to find these on Amazon).


Not only does this spread knowledge to your friends, but it raises this book through the rankings of kindle making it much more visible to everyone. I cannot stress how important this is. By doing this you can help to send this book “Viral”. If everyone does this we can get this book onto the Amazon “Bestsellers” list alongside all the world’s top ranking books.


I may have to raise the price to around US$2.99 at some future point to participate in certain Amazon marketing programs but this will probably be temporary so contact me to find out when the price is coming back down if you wish to pass this on to others.
If you disagree with what I’ve written, you are in good company with around six billion souls on your side. One person who did agree with me however, was a Dutchman named Theo Van Gogh, grandson of Vincent Van Gogh's younger brother. He was brave enough to make a short film about Islam called “Submission” exposing some of its realities, just as this book has done. Here is the last known photo of Theo Van Gogh after he was brutally stabbed to death by a Muslim. You can still see the dagger sticking out of his chest. 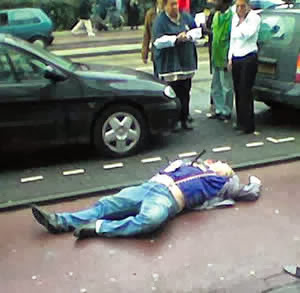 This is just one out of a conservatively estimated 270 million people who have been killed by Jihad in the last 1400 years[3]. In the twelve years since 9/11 there have been more than 21,000 terrorist attacks by Muslims. Don’t expect these attacks to end anytime soon unless people learn the truth about Mohammed and Islam.

I’m going to leave you with a quote from Winston Churchill. For years before WW2 it was almost universally agreed that Hitler and his Nazi party were just a group of patriots who wanted restore German pride and revive its economy.
Churchill ignored popular opinion and called them out as dangerous supremacist totalitarians. For his trouble he was decried by all and sundry as a “warmonger” (the words “hatemonger” and “Naziphobic” hadn’t been invented yet).
What few people today know is that in his younger days Churchill was fighting against Muslims in the Sudan. At that time they were trying to annihilate the Christians in the South of the country (things haven’t changed much). In his memoirs he wrote the following:

"How dreadful are the curses which Mohammedanism lays on its votaries!
Besides the fanatical frenzy, which is as dangerous in a man as hydrophobia
in a dog, there is this fearful fatalistic apathy. The effects are apparent in many
countries. Improvident habits, slovenly systems of agriculture, sluggish methods
of commerce, and insecurity of property exist wherever the followers of the Prophet
rule or live. A degraded sensualism deprives this life of its grace and refinement; the
next of its dignity and sanctity.

The fact that in Mohammedan law every woman must belong to some man as
his absolute property, either as a child, a wife, or a concubine, must
delay the final extinction of slavery until the faith of Islam has ceased
to be a great power among men. Individual Moslems may show splendid
qualities - but the influence of the religion paralyses the social
development of those who follow it. No stronger retrograde force exists
in the world. Far from being moribund, Mohammedanism is a militant and
proselytizing faith. It has already spread throughout Central Africa,
raising fearless warriors at every step; and were it not that Christianity
is sheltered in the strong arms of science, the science against which it
had vainly struggled, the civilization of modern Europe might fall, as fell
the civilization of ancient Rome."[4]
It used to concern me that everyone seemed to disagree with what I was saying. Once I found out that Churchill was on my side, I never gave it another moments thought.

To those of you who have read this far, thanks for taking the time, I hope you enjoyed it, I hope you understood it and I hope you will be inspired to pass this on to everyone you think will read it, while it is still possible to do so.
Harry Richardson

Posted by Harry Richardson at 03:21